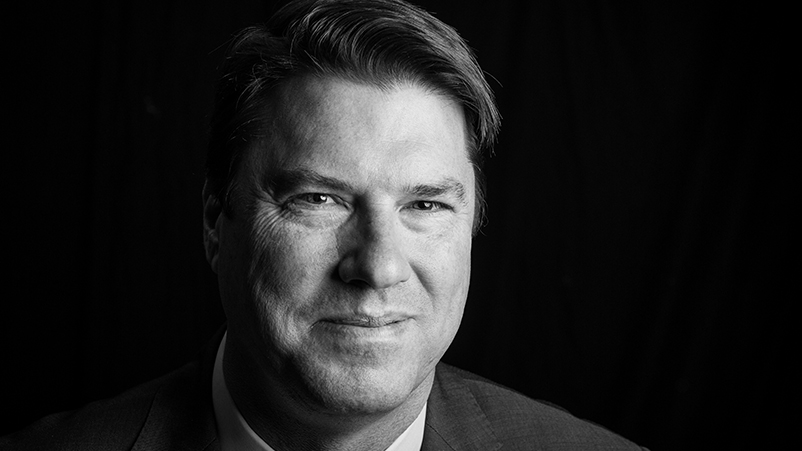 McLennan on holding company breakups: “It could be a combination of private equity teaming up with another party - or one of the consulting firms.”

Hamish McLennan, deputy chair of $92bn investment group Magellan and chair at REA and HT&E, thinks private equity, consultants, or a combination of the two could break up communications holding companies within the next three years. And the tougher the market gets, the more likely that outcome. He also suggests the tide may be turning on marketing's boardroom credibility problem.

With three decades across ad, media and communications companies, and plenty of M&A under his belt, Hamish McLennan has as good a view as any of where media might be headed. As deputy chair of a $92bn investment company, he’s arguably got a handle on where the smart money's going, attuned to the "whispers" of global dealmakers.

Over the next few years, McLennan sees ad holding companies being snapped up or broken apart, piecemeal or wholesale, by either big consultants, private equity, or a combination of the two. He thinks a digitally-savvy global creative network could flourish, though his definition of a global footprint is a several sizes smaller than the boots holding companies currently wear.

For the local ad market, holding companies and media, he sees a tough year and more blood loss ahead for traditional businesses should they fail to shake up market offerings and cut costs.

However, McLennan offers a salve for marketers suffering a c-suite credibility crisis: board-level appetite to better understand marketing and its value is increasing; those that can package up media, comms and tech will be in demand.

McLennan says the “tech titans” have never been more powerful. “Behind their walled gardens, it is very hard for external marketing communications companies to operate.”

Handicaps in the form of structures and costs – offices set up around the world for global clients in the post-war boom - can no longer be carried. So holding companies are trying to pivot their businesses while slashing costs.

McLennan thinks the whispers around “some of the big private equity firms running their rulers over some of the holding companies” could make the next few years interesting, should deals eventuate.

“Would they hive off some of the businesses and then break them up? What would happen if one of the holding companies with a number of creative arms hives them off? If one or two were then put on to the market, what would that look like? It’s hypothetical but it’s a real discussion that we should have at the moment,” says McLennan. “I think it’s a possibility”.

He believes big consulting companies will also continue to buy creative agencies. Could they go the whole hog and buy a group?

“They’re certainly encroaching on [holding group] business. Look at what Accenture’s doing with its data play, online trading and so forth and so all of [the big four] have identified marketing services as a big opportunity.”

“Yes, I do.  Over the next three to five years, I think something could happen. And the more those businesses become under pressure, I think something will happen,” he says. “It could be a combination of both – private equity teaming up with another party - or one of the consulting firms.”

McLennan suggests the combination of a creative network and a consultancy would be “a really fascinating hypothetical”, given their respective strengths.

“As a board member and chairman, there is no doubt the consultancies have done a very good job of getting into the boardrooms. There’s a lot of sophistication around their thinking, what they are offering.”

However, he says the consultants are “nowhere near” the holding companies when it comes to creative services, and some would “salivate” at the prospect of being able to offer a creative arm.

“So if you could repurpose one of the traditional [creative] agencies, make them more digitally-led then, I think that’s potentially an opportunity.”

But McLennan thinks a global network need not necessarily be truly global, given legacy footprints are killing holding companies with cost.

“When I ran Y&R, we had 184-odd offices across 120 markets. You just don’t need that anymore.” He says taking a presence in “first tier markets, or maybe the top 12 by size” is probably a good place to start.

Either way, says McLennan, it is “reasonable to assume that the consultancies will continue to buy creative businesses”.

What’s in a name and can a radio business cut it?

McLennan is underwhelmed by the name of one of the firms he chairs, Here, There & Everywhere, the company formerly known as APN. “It’s probably one of the most confusing and silly holding company names that I’ve ever heard.”

But apart from the name, “we’re in great shape,” he says, with KIIS “number one again” in the latest survey and Gold FM performing well in Melbourne. McLennan says investment is paying off.

“We’re really pleased with the way it’s going nationally, there’s momentum in the business and the trajectory is really good,” he says.

With no debt and “$100m sitting in the bank”, McLennan says if suitable “bolt-on” acquisitions come along, “we’ll do that and then we’ll just see how the market goes over the next 6-12 months”.

Is it looking beyond audio, can a standalone radio business like HT&E cut it in a consolidating media world?

“That’s a great question,” says McLennan. “It seems a little counter intuitive for me because I’ve always been one who looks for scale and on the whole I would say that it’s really important in any business.”

He adds there is “much to be said for being highly focused and nimble,” and that is where HT&E is at, for now, says McLennan. “But we’ll see.”

"What the owners of the TV networks have to do is redefine their offering so that they talk the same language as the tech companies. But they’ve got to address their cost structures. That’s their biggest task."

Does television have a future?

The former Ten CEO “loves” television, but changes to media laws may have come too late.

The challenge for TV, he says, is the same facing ad agencies. “They’ve got this massive cost structure. They are high cost businesses which have a lot of advertiser pressure around them at the moment.”

Meanwhile the tech platforms are serving up low cost content and offering data and efficiency to marketers – who have shifted spend out of TV as a result. Habits that in some cases have become dependencies.

“For traditional media, it’s not so much that you’ll lose 30 per cent overnight, but it’s the 5 per cent every year lost to your competitors. That’s what we’ve been seeing for 10 or 15 years now and that’s what I lament.” Had media companies been allowed to merge five years ago, “they would have been able to scale and redefine their offering when it mattered most against the tech companies,” says McLennan.

“But in many ways, I think the horse has bolted."

Does that mean he thinks broadcast television’s days are numbered?

“No. There will always be TV networks, that’s for sure. What the owners of the TV networks have to do is redefine their offering so that they talk in the same language that the tech companies talk,” says McLennan. “But they’ve got to address their cost structures and I think that’s the biggest task.”

On what marketers bring to the board

As deputy chair of financial services firm, Magellan, McLennan sees a shift in board directors’ attitudes towards marketing. He says Magellan founder Hamish Douglass is a “world-class operator, one of the best I’ve ever dealt with” - and is someone who gets the importance of brand.

“Hamish Douglass is very savvy when it comes to how do we communicate the Magellan brand, what does it stand for and what is important,” says McLennan.

While marketing frets that it lacks credibility at board level, McLennan thinks the tide may be turning.

“What I found over the years is that if the business is performing and hitting its targets, brand is usually less of a concern.  But I find [now] there is a desire and a need amongst a lot of board members to better understand [marketing and brand] and I think we might be seeing a new wave of people who understand media and communication and tech – so [as a marketer] wrap that up into a bundle.

“I think they have a real role to play, whether it be for crisis management, how do we go to market, can you inform the board as a skill set on what you’re seeing in the market.”

Locally, the immediate future is not particularly pretty, suggests a “bearish” McLennan, who thinks the latest rate cuts may signal there is “not a lot of juice left in the economy”.

Should pressure increase on the ad market, McLennan thinks the outlook for the traditional media sector “is about consolidation, getting cost out and redefining their offering.”

While chaos and complexity is “the new normal”, McLennan thinks a dip in the local economy could make things “a little more chaotic”.

“Businesses that are run efficiently, that know what they stand for, I think will do well and prosper,” he suggests. “But if your question is tied more to what’s happening in traditional media, I think some players will suffer if they don’t look at how they go to market and get cost out of the business.”