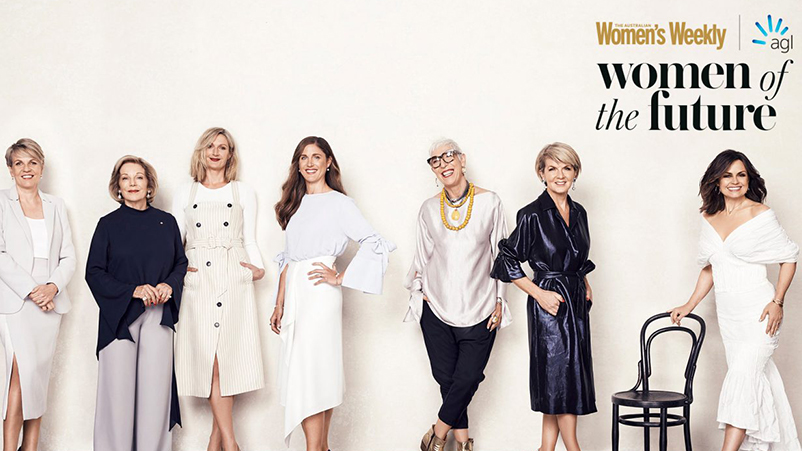 The prestigious event, which celebrates some of the country’s most extraordinary young women who are making a difference, featured a topical and thought-provoking panel discussion between; Australian Banking Association chief executive officer, The Honourable Anna Bligh, TV and radio personality Amanda Keller, journalist Annabel Crabb, and the City of Sydney Councillor and former MP for Wentworth Dr Kerryn Phelps, hosted by emcee Virginia Trioli.

The panel highlighted the current controversy around women’s reproductive rights. Anna Bligh shared her admiration for NSW Premier Gladys Berejiklian’s “courage in taking this issue on.” She spoke of the shock she felt when she heard “a male journalist harangue the Premier about her personal reproductive history” – shocked by “the level of disrespect to her and to women in general...That’s when you know you’ve got a long way to go.”

Kerryn Phelps spoke of her experience as a General Practitioner. “As a GP, I have to work with women and their belief systems without judgement. The political system should also reflect that. This should be a health issue between a doctor and a woman. Politicians and the criminal justice system need to get out of the way.”

The panel also spoke about imposter syndrome and surviving and thriving through failure. “All too often, women pay a higher price for failure,” Anna Bligh said.

The ​Australian Women’s Weekly AGL WoTF patron, the Honourable Dame Quentin Bryce, announced her retirement as Patron this year, following seven years of service to Women of the Future. Dame Quentin passed the baton to long-time friend Elizabeth Broderick AO who will take up service from 2020. Our longest serving Sex Discrimination Commissioner and United Nations Special Rapporteur, her review into the treatment of women in the Australian Defence Force led to widespread cultural reform.

Dame Quentin and Elizabeth Broderick took to the stage for an inspiring Q&A with Virginia Trioli. Dame Quentin spoke of her years as patron. “My engagement with young women,” she said, “is right at the centre of my heart.”

Elizabeth Broderick spoke of her enthusiasm for her new role. “We live in challenging times,” she said. “You could almost say we live in dangerous times. But I am determined to ensure that when this period of pushback against women’s rights ends - and it will end - we will have a strong foundation to make sure the future is one where men and women will be able to equally thrive.”

The ​Australian Women’s Weekly AGL WoTF initiative is a key component of ​The Weekly’s long-standing commitment to support and promote the female leaders of tomorrow. Nominees are entered across three unique categories: ​Innovation and ​Technology, Entrepreneur and Business, and ​Community, Health and Charity, with the winner of each category receiving $35,000 and a full-page advertisement in ​The Australian Women’s Weekly to help further their causes.

18-year-old Macinley Butson took home the ​Innovation and Technology award, thanks to her revolutionary invention SMART Armour that reduces the amount of radiation breast cancer patients undergoing radiotherapy absorb in their non-cancer-affected breast. Since devising the intricate shield three years ago, Macinley’s SMART Armour has been patented and approved by the Therapeutic Goods Administration.

Little Dreamers founder, Melbourne’s Madeleine Buchner​, won the judges’ hearts and the Community Health and Charity award. After growing up caring for her younger brother and mother, she was spurred to launch Little Dreamers Australia, the country’s only non-profit organisation supporting young carers.

Young fashion designer and innovator, Courtney Holm, was the winner of the ​Entrepreneur and Business category. Courtney is tackling waste in fashion through her label, A.BCH, sourcing raw materials from ethical suppliers and educating customers on how to be responsible for their garments. Her recent collection, presented at Helsinki Fashion Week, was entirely circular, generating zero waste.

“We’ve been delighted to collaborate with the wonderful team at ​The Australian Women’s Weekly for another year, on their prestigious program, Women of the Future,” says AGL Chief Customer Officer, Christine Corbett. “By recognising the entrepreneurial spirit of young Australian women, these awards provide more opportunities for the next generation of innovators and disruptors – progress we can all benefit from.”

Editor-in-Chief Nicole Byers is proud of the 2019 WoTF campaign, saying: “The calibre of award entries continues to blow us away. The 2019 finalists have a special combination of creativity, innovation and smarts and while they’ve already achieved success in their respective fields, there is a sense that they’re only just getting started which is truly exciting.

“I’d like to sincerely thank AGL, our patron and the award judges, panellists and of course, the finalists, for allowing​The Weekly to keep telling the stories of Australian women. We look forward to continuing to uncover and reward young women who will shape the future of Australia.”

The winners feature in the October issue of ​The Australian Women’s Weekly.

The biggest names in rugby league are joining the new Wide World of Sports radio show this month. The man regarded as the...

UnLtd, the industry’s social purpose organisation, is expanding its operations to Western Australia with Carol Morris...