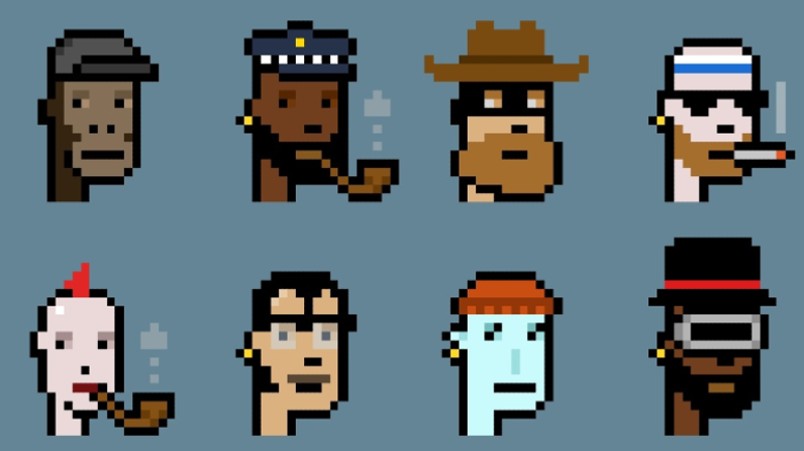 Brands are starting to use Non-Fungible Tokens to boost engagement, grow brand value and generate revenue. These CryptoPunks sell for as much as US$7.5 million each.

Nike is betting big on Non-Fungible Tokens (NFTs) and digital shoes to drive sales, build brand, and potentially generate millions in direct revenue. Coca-Cola, Asics, the NBA and The Olympics have each created a range of NFTs, and VaynerMedia's Gary Vaynerchuk is generating millions in royalties from the sales of his own range of "Vee Friends". So far Australian brand marketers are way behind the curve. But a Sydney-based cereal entrepreneur thinks that is about to change.

If you’re an artist, a creator, or even a brand, the real drive is commercial return – it’s a cool model, and a transparent model.

At the end of 2019, Nike coined the term “CryptoKicks”. It wasn’t a PR stunt – the firm filed a detailed document with the US patent office that outlined its plans for “cryptographically secured digital assets”: Tokens that represented the ownership of a digital shoe, also known as a Non-Fungible Token (NFT).

In the past year, Coca-Cola created and sold four NFTs for $575,000 – donating the proceeds to charity; VaynerMedia CEO Gary Vaynerchuk hand-drew 268 pictures called "Vee Friends" and sold them for tens of millions; Asics has created a collection of digital shoe NFTs; the NBA has created digital video “moments” from games that it sells like trading cards in packs. Taco Bell sold 25 NFTs in 30 minutes. Publisher Merriam-Webster says it plans to auction off an NFT of its definition of an NFT. And just this month, former AFL player Gary Ablett Jr signed a multi-year deal with Pickstar and Sportemon Go to tokenise moments from his career, joining former Australian cricketer Adam Gilchrist.

And now a Sydney-based granola start-up is getting in on the action – and says Australian brands are missing a major opportunity to generate real revenue.

Alt Saints sells artisan cereal both directly to customers and through smaller retailers. Each box features a Minecraft-esque block animal and a number – representing the number of those animals left in the wild. One per cent of revenue goes to support grassroots environmental groups. But it’s the combination of food, themed NFTs and building a dedicated community that founder Charbel Zeaiter is most excited about.

“When I started it was about leading with food. It seems very quickly we’ll pivot towards being a tech company,” Zeaiter said. “If you’re an artist, a creator, or even a brand, the real drive is commercial return – it’s a cool model, and a transparent model.” 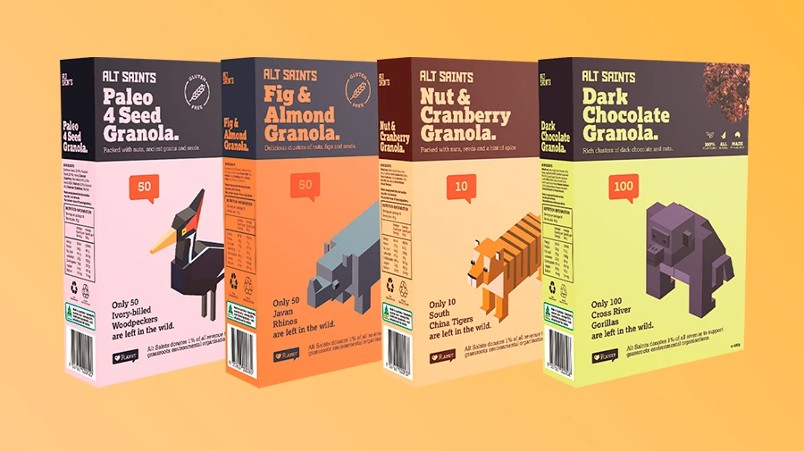 Non-Fungible Tokens, or NFTs, are unique digital assets that can’t be copied and can be certified as original using blockchain technology. Blockchain technology allows for a shared digital ledger that can track transactions and assets. Two early NFT success stories were CryptoPunks – pixelated characters that have sold for as much as $7.5m each, and the Bored Ape Yacht Club – images of colourfully dressed and altered cartoon apes that have been included in a Sotheby’s auction. Both have become status symbols within the cryptocurrency community due to their price and rarity: only 10,000 of each were created.

“Blockchain tech creates digital scarcity,” AdColony’s Lance Traore said. “When you look at young people now, for them, digital value is perfectly normal. Parents get mad because young people want to buy stuff in Roblox or Fortnite, but for them, it’s not really a foreign concept at all. Some people are like, ‘why don’t you take a screenshot of that Bored Ape or CryptoPunk’.

"An easy way to understand how NFTs work is ‘why don’t you copy that Bored Ape and try and sell it? Once you realise you can’t do that, you’ll realise. You can take a photo of the Mona Lisa, or a print, but you won’t be able to sell it.”

99 per cent of these projects are short-term thinking.

A key feature of NFTs is that they can generate revenue for their creators. When "minting" NFTs, a percentage of resale value can named as a “royalty”, ostensibly to cover the costs of using the blockchain. Some NFTs have five or 10 per cent coded into them – CryptoPunks, for example, which were initially given away for free, are generating hundreds of thousands of dollars for their creators through resale royalties alone.

Vayner Media’s Gary Vaynerchuk has been one of the most high-profile faces of the NFT movement. He uses his own name to generate millions for himself, a model he believes can work for brands as well – and they seem to be buying that line: VaynerNFT, Vaynerchuk's new NFT-focused agency launched in July with Budweiser as its flagship client.

“We're seeing a lot of – particularly brands – that have jumped on the NFT bandwagon so far have really focused on that collectible side of things… 99 per cent of these projects are short-term thinking,” said VaynerMedia ANZ Business Director Amy Bradshaw.

"They're one-time drops as opposed to longer term programs that should be designed to deliver value for the community as opposed to short term gain for the brand or the organisation."

In other words, don't just sell a digital picture – give it some intrinsic value. Vaynerchuk created Vee Friends, a series of 268 drawings that he sold as NFTs for tens of millions of dollars in May. Since then, Bradshaw said, they have increased in value and been resold and resold again – generating a 10 per cent royalty each time. But ownership of a Vee Friend has other perks. It means a ticket to VeeCon, an exclusive conference for Vee Friends holders, for example.

Whether or not marketers agree with Vaynerchuk's approach, the floor price for a Vee Friends NFT is currently 16.88 in the cryptocurrency ether, worth AUD$67,000 at today's prices. An image of the cheapest one, Glowing Glow Worm, is below. Vaynerchuk is clearly making a lot of money, and says brands can do the same.

Nike: doing it
Nike wants to build a community through NFTs. Per the firm: “There exists an opportunity to engage and influence users in the digital realm via collectable objects so that they may be more engaged with a brand in the physical world."

Each shoe could be sold with a unique NFT, which could then be used to “breed” with another digital shoe to create “shoe offspring” and, “based on the rules of acceptable shoe manufacturability, have the newly bred shoe offspring custom made as a new, tangible pair of shoes.” Digital shoes creating physical shoes, boosting consumer engagement with the brand.

At least that's the theory. Nike hasn't yet released an NFT, despite filing patents two years ago, allowing rival footwear brand Asics to steal a march, auctioning the first of its digital shoes in July.

For brands, the use cases are endless, reckons AdColony’s Lance Traore. “Take the Sydney Swans. You can create a community token around that. If you're a fan, you could buy a token, and that gives you certain rights within that community – free tickets to games or something. As the team does better or worse, those tokens will be worth more or be worth less,” he said.

Blockchain will shake up brands, eventually

Blockchain technology, most associated with cryptocurrencies like Bitcoin and Ethereum, is starting to have a material impact on businesses globally. But there are use cases that have yet to be developed, according to Queensland-based blockchain company Labrys.

“I think the paradigm or the shift in thinking has gone from 'this is a fad, don't bother wasting your time looking into it' to now 'this is something serious," said founder Lachlan Feeney. This is going to be a pretty critical technology, and we want to learn how to use it."

“We're still at the early sort of innovators and early adopters stage of the technology. But it's becoming pretty clear, even to major organisations, that this is going to be a core component of marketing strategies.”

Alt Saints’ Zeaiter imagined a collectible like the Woolworths Ooshie or Coles Mini Collectible, but in digital form.

“What I was imagining was, you buy a pack of cereal and inside would be a code that would unlock the ability to unlock an NFT,” Zeaiter said.

Coles and Woolworths were heavily criticised for their use of plastic in collectibles, but what if a digital marketplace for collectibles could be created that generated income and used no plastic? Zeaitar, who plans to present to Woolies next month, say NFTs are not mainstream enough – yet.

“The NFT community is not necessarily the customer,” he said. “But it’s a pretty enticing thing. If you’re an artist, a creator, or even a brand, the real drive is commercial return. It’s a pretty cool model.” 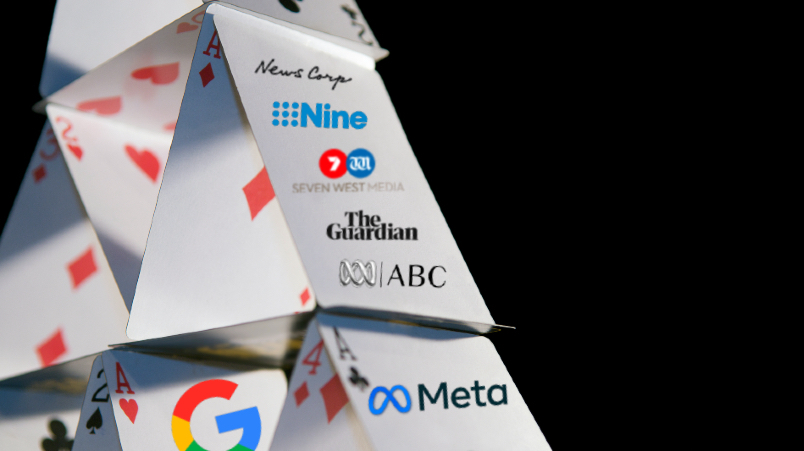