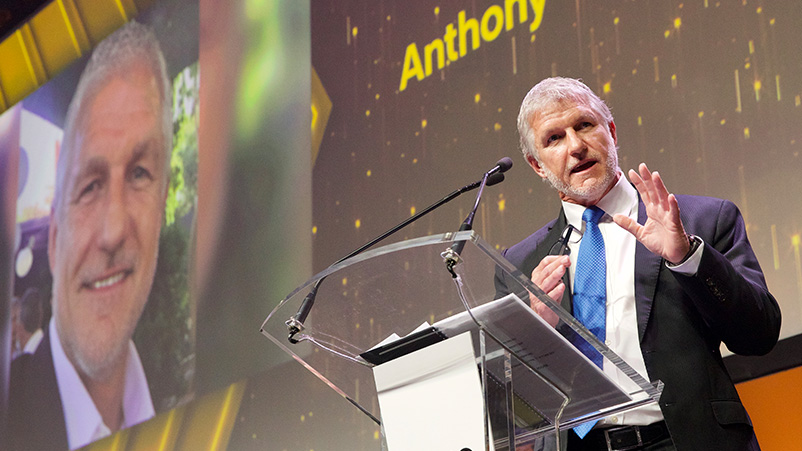 Share Bookmark
The media sector's widely regarded agent provocateur, Anthony Fitzgerald, returned last week for some trademark trailblazing observations on the industry after the Media Federation inducted him into the MFA Hall of Fame.

“Much of traditional media will get steamrolled by Amazon. It will ultimately be able to fulfill every stage of the [marketing] funnel. They are just putting the pieces together.”

It’s been 14 months since Anthony Fitzgerald left as CEO of the then $1.2bn MCN, now rebadged Foxtel Media.

The TV veteran of 35 years has kept a low profile despite ongoing speculation on where he might land next. But after the Media Federation inducted him into the Hall of Fame last week, the TV sector’s agitator for fast, industry-wide transformation aired a few observations after a year out. Plus some hints at what the future holds.

TV not ready for Amazon’s funnel

Long a staunch defender of traditional media against the social media platforms, Fitzgerald says broadcasters and publishers are “finally making a stand” against YouTube and Facebook and extracting better content rights deals. But Amazon now looms large as the “big media disruptor”.

“Much of traditional media will get steamrolled by Amazon,” says Fitzgerald. “Amazon will ultimately be able to fulfil every stage of the [marketing] funnel. They are just putting the pieces together. Part of what the broadcasters need to do to compete effectively is reinvent TV measurement with new digital metrics that move beyond average audience, CPM, reach and demographics to more accountable engagement, attention and business impact.”

Four TV bosses in a room

For the best part of a decade, Fitzgerald and MCN carved out a reputation as the  innovator across audience and advertising data, systems, automated trading and audience measurement.

Fitzgerald has also long agitated for broadcasters to drop legacy turf wars and collectively compete with the technology giants. In a keynote speech in February 2018 at the Future of TV Advertising summit, Fitzgerald outlined an “urgent” four stage plan for the broadcast sector to align on audience data, segmentation and trading systems, overhaul measurement and improve the viewer experience via lower ad loads.

“All of us need to put down the cannons and collaborate,” he said at the time. “I fear we face ongoing declines or worse, a structural breakdown in the ad-funded TV model. Not tomorrow and not this year, not even next. But the action we need to take together to head-off such a scenario is now.”

"Unlike any other television market in the world, there’s four decision makers in Australia...they can get together in a room and make the decision for the future success of the industry."

That was then. What does Fitzgerald, looking from the outside, make of the industry’s progress in the past 18 months? Is it moving fast enough?

“No,” he says. “They’re not doing it quickly enough. I’ve talked about this over the last five years. I talked about it 18 months ago. I now hear rumblings that there’s a push for change or to develop an industry-wide system. It should have been done long ago. It needs to be done quickly,” reiterates Fitzgerald.

“Broadly speaking I’m absolutely optimistic about the video marketplace. I’ve said for probably 10 years that video was going to win the day and companies in the video space had a very bright future ahead of them - if they got their business model right,” he says.

"MCN became known as one of the most innovative and progressive sales operations in the world."

News Corp and Foxtel might have taken MCN, recently rebadged Foxtel Media, in an entirely different direction to that envisioned by Fitzgerald as CEO, but he remains firm on the macro trends of cross-media consolidation in Australia and says a regional aggregation model like MCN’s remains a market opportunity.

“It’s true I had a very strong view that the MCN model was powerful enough to move beyond Australia’s shores, certainly into Southeast Asia and New Zealand,” he says.

“We had a number of conversations with our shareholders in the two years prior to my departure looking at that very prospect because the challenges all media companies face today with the global digital behemoths are scale, relevance, leverage and cost-of-sale.

“If you take a look at what’s happening locally here in Australia with the likes of Nine acquiring Fairfax, we’re going to see more of it,” Fitzgerald suggests.

“The strength of the regional MCN model was based on aggregation of a number of large entities from free-to-air and pay TV, whose businesses were being challenged to smaller independents that couldn’t afford to set up their own sales operation. It enables them to effectively compete and that same model can apply beyond Australian shores - of that there is no doubt. The original model we set up at MCN was operating in a whole range of different areas from television, digital, out-of-home to activations and a range of other disciplines. We were looking to expand further and had built the business case to prove the model. So that opportunity exists.”

Indeed, Fitzgerald believes with the renaming of MCN to Foxtel Media and the end of MCN as an independent representation group with diverse shareholders, a new gap has opened up in the market.

“There’s an interesting opportunity there in many ways for other companies to step into that space because there now isn’t an independent, transparent sales aggregator at scale in the marketplace.”

What next for Fitzgerald?

Is this a hint of what’s coming for the 56-year-old who’s “too young to retire”? Fitzgerald has joined the board of Tonic Health Media, of which he is also an investor, and is about to take a role as a board advisor for an Australian start-up that is going global.

“I’ve done some consultancy work for a range of media companies who are talking to me about my view on what the future holds,” he says. “I think there’s enormous opportunity for a company to continue to shape the future of the media sector, not just in Australia but beyond. Whether that’s me, or it’s me advising a number of companies on how they might go about doing that, remains to be seen.”

Fitzgerald says he’s been approached for a number of full-time roles but is “yet to find anything that’s going to entice me back to a full-time, 60 hour a week corporate gig.”

“Stunned” with the gong

Fitzgerald is not typically lost for words, or a viewpoint, but he admits to being stunned and speechless after Media Federation of Australia chairman Peter Horgan told him on a phone conversation that he was the 2019 MFA Hall of Fame inductee.

“I was, probably for the first time in my life, virtually speechless,” he says. “I do think it’s terrific to recognise people from the media owner side because a great deal of the drive for change in the recent past and in the future will need to be driven by the media owners and senior executives from media.”

Change and innovation has been the constant since Fitzgerald left his high-profile gig at Seven in 2003 to join a small firm called MCN, which at the time was writing about $50m in advertising revenues as part of an aggregation model for subscription TV channels.

When he left last year, MCN had hit about $1.3bn in advertising, although half of that later exited when Network Ten took its sales function back in-house after US broadcaster CBS beat Lachlan Murdoch and Bruce Gordon for the takeover of Ten.

Fitzgerald credits MCN’s board in 2003 for enabling what was then a radical switch: a free-to-air broadcast executive joining a much smaller subscription TV industry business certainly raised eyebrows.

“Some scoffed at the time, particularly those that were in free-to-air television,” he says. “The truth is I took the job because we were fortunate to have a really progressive, courageous board that immediately allowed us to invest in a growth strategy and they allowed the exec team to behave in a really progressive, courageous manner and to innovate and lead the industry.”

Given the changes to MCN after his departure, does Fitzgerald have any regrets?

"None whatsoever,” he says.  “We grew that company from effectively a $50 million business to its absolute peak at one point of nearly $1.3bn in turnover. It was a true multichannel, multiplatform, multidiscipline media sales entity that had done a whole lot of ground-breaking, and some might say, industry-shaping innovation. So no, I couldn’t be prouder.”

In announcing Fitzgerald’s entry to the Hall of Fame, MFA chair and Omnicom media Group CEO Peter Horgan was effusive.

“His 15 years plus at the helm of MCN is the stuff of business transformation legend,” Horgan said. “The revenue story only paints part of the picture. MCN became known as one of the most innovative and progressive sales operations in the world. An incubator for great talent and driven people. If TV was his first love, we all wonder what is next. As an industry we know we will be much better with you back in media.”

Significant consolidation is likely in the coming months as agency groups adapt to the post-COVID environment and scramble to...

When former Coles marketing heavy Amber Collins was approached by Australia Post to take the CMO role, she immediately said...

Well before his appointment last week as Starcom Australia CEO, Nick Keenan opened up in this Mi3 podcast on running a fast...