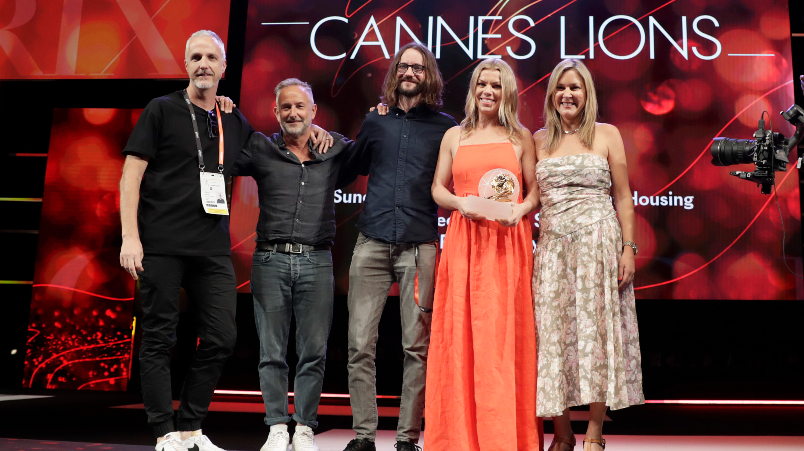 Suncorp and its creative agency Leo Burnett stormed the Innovation Lions at Cannes overnight, picking up the highest accolade - the Grand Prix - for a long-range marketing program designed to show Queenslanders how to build disaster-proof homes in the face of climate change. The "One House" and "Resilience Road" housing prototypes and associated campaigns started out as an activation idea from Leo Burnetts in 2019 before Suncorp and the agency realised it could become a much bigger program to help home-owners, ravaged by fire and flood events, be better prepared. Three years in the making, the Innovation jury at Cannes clocked it as world-leading.

It was, I think, a more innovative way to approach spending our budget rather than more of the same, which is ad hoc, bespoke, sometimes one-off campaigns.

We've also seen the federal government recently announce a $600 million resilience fund for disaster mitigation programs. And that has come about because we've helped to elevate, I believe, the conversation around resilience.

‘Not bad for marketing’

A marketing-funded and led project to design, build, educate and change the way Queenslanders adapt their homes to climate change from Suncorp has directly impacted Australian government policy on housing and disaster prevention – while also driving almost four times the forecast uplift in sales enquiries.

What started as a broad brief from the insurance group’s chief marketer Mim Haysom to its creative agency, Publicis-owned Leo Burnett, to elevate its “resilience” goals, has become a James Cook University, CSIRO-backed project designing and developing homes that better withstand bushfires, cyclones and floods.

First it was One House, a building designed specifically to survive whatever natural disaster Queenslanders faced. It has now evolved into Resilience Road, which took those lessons and applied them to five homes on one street in Rockhampton.

“It was a massive project. The intent of it was to show communities how we could help them to be more resilient from those perils,” Haysom says.

But since then, it has become a coordinated cultural push from Suncorp, involving previous disaster victims, industry groups and the federal government.

“We've worked with the Insurance Council of Australia, and they've launched Project Resilience, which aims to embed resilience into the national construction code by 2025,” Haysom says.
“And we've also seen the federal government recently announce a $600 million resilience fund for disaster mitigation programs. And that has come about because we've helped to elevate, I believe, the conversation around resilience, particularly in the Queensland market.

“There are some things that you can't necessarily measure with a percentage, but you know that this work has helped elevate and drive some of those conversations and outcomes.”

One House to rule them all

The project started back in 2019 with a brief. Haysom didn’t write it with specific channels in mind, rather as a broad idea to “elevate our strategic pillar of resilience”.

“The irony was… they'd briefed it and we've come back to them with a campaign with TVCs and all of those traditional things, and we had this as an activation as a potential supplement to the original idea,” Amanda Wheeler, Chief Client Partner at Leo Burnett, says.

“The creative team had just put this on there as an extra element for an activation that really did answer the brief, but we knew we may not be able to do it in the amount of time.”

The idea to build a resilient home was there, but it needed experts, materials, and above all, time.

“We realised that the brief we had given was for a campaign to be in market in sort of four or five months,” Haysom says.

“To do this properly, we were going to need to really think about it, invest in it, get great partners. The kernel of the idea was there, but it was at a much smaller scale … So we said, ‘well, let's park it, really think about how big we could make this, what sort of investment would be required’. And in the meantime, give me another interim campaign to give us the space to do this really properly.”

Leo Burnett met with James Cook University, the CSIRO, architecture firm Room11 and well regarded specialist production firm The Glue Society, to bring the brains trust together. There was a four-month scoping project followed by 12 months of production, rounding out to an almost 18-month project. It was also entirely funded out of Suncorp’s marketing budget.

Finally, in April 2021, the company launched One House, a campaign known as ‘One House to Save Many’. Over the previous year, the prototype had been exposed to extreme winds – James Cook University has a Cyclone Testing Station – as well as a maelstrom of cinders and flame. In Mogo, NSW, two small test buildings were engulfed in flames for two full minutes to measure how a similar home would survive a bushfire “burnover”.

“Australians are so used to building cheap, light-weight, combustible houses. But these kind of materials are not designed to reliably survive in our landscape,” the CSIRO’s Justin Leonard said after the test.

“Researchers collaboratively chose materials and design principles that would enable a house to survive each of these extreme events. This hasn’t been attempted before.”

The process was captured on camera and turned into a documentary, which was run by Nine.

“We knew really early on that we wanted the project to be something that we could take to audiences en masse,” Haysom says. “And so we planned for that and we shot and we produced throughout the course of the production of the project and the experiment itself.”

It was a Leo Burnett idea that needed time, space and resources to flourish. But it also required trust between the marketers and the agency.

“Where you get the best work from is where you give your creative agencies scope to be creative and you trust in the process and you help to amplify the ideas that they bring to the table,” Haysom says. “We wouldn't have got to One House without Leos, without a doubt. There's no question about that … I don't question the value of my creative agencies in terms of the impact that they bring to my brand and to my business.”

When One House launched, it garnered more than 300 pieces of earned content, including news mastheads and major television networks.

“In the first couple of months of the campaign, we had 110,000 people go to the website to learn more,” Wheeler says. “And then they spent an average time of four minutes there, which is quite high in any kind of measure because they wanted to… they learned one thing, and then it has a knock-on effect. And they came back, and we all could see the repeat visit as well. That level of engagement is really unusual for a campaign alone to have.”

Importantly, in a crowded insurance market, where rivals can look similar, the project stood out. “We were having a conversation that others weren’t,” Wheeler says.

In terms of metrics from Suncorp’s end, the campaign has been a standout success, Haysom says. It targeted Queenslanders, and in that market it drove a 12 percentage point increase in consideration among non-Suncorp customers. “That’s pretty significant, and that’s in a short period of time,” she says. That’s “probably double” the result of Suncorp’s previous campaigns.

The company saw a 38 per cent rise in enquiries, after setting a target of 10 per cent, “which at the time we thought was quite punchy”, Haysom says.

“And similarly, I mean, quotes is probably an easy business one to talk about without giving too much away. But we saw an uplift of about 25 per cent in customers coming to us asking for a quote and engaging with the brand,” she adds. That’s compared to the previous year.

If Suncorp hadn’t invested in the One House and Resilience Road campaigns, that money would have gone back into “more traditional campaign work, more product work”, Haysom says.

“It was, I think, a more innovative way to approach spending our budget rather than more of the same, which is ad hoc, bespoke, sometimes one-off campaigns,” she says.

“Not that we do a lot of them, but that's the alternative. So for us, it was absolutely worth the time and worth the investment because it was something significant for us that was really going to bring to life our brand DNA and our brand purpose.”

And creating a brand purpose that stands out is part of the campaign’s appeal. Building a resilient house, retrofitting an existing street of homes with resilient features, developing cost-effective solutions… they’re all a part of Suncorp’s Insurance brand now, especially in Queensland.

The company now offers specific products, like Build It Back Better, a feature that gives Suncorp Insurance customers access to up to $10,000 worth of “resilience upgrades” if they’ve been impacted by a weather event.

The shift in public perceptions towards sustainability was demonstrated in the recent federal election, in which the Greens scored a record number of seats in parliament. And while brands will need to step up, there are some risks associated with that.

“Customers and communities expect organisations and brands to step up and play a role in CSR, in sustainability, in addressing climate change,” Haysom says.

“What's going to be interesting is to see how much they lean into that, because I think the risk for brands where resilience sustainability is not core to their purpose or their DNA, they run the risk of looking like they're greenwashing.”

Haysom says most marketers are sophisticated, understand the need to “lean into consumer sentiment”, and for brands to be authentic and relevant. But still – no-one wants to get it wrong.

Next project?
The Resilience Road campaign has been out for about a month, but there’s more coming. “Everything we do is linked – the link between One House and Resilience Road is really tangible,” Wheeler says.

“We went from one house to one street and the ambition is to put as many Queenslanders as possible on the road to resilience. So that’s where we’re heading.”