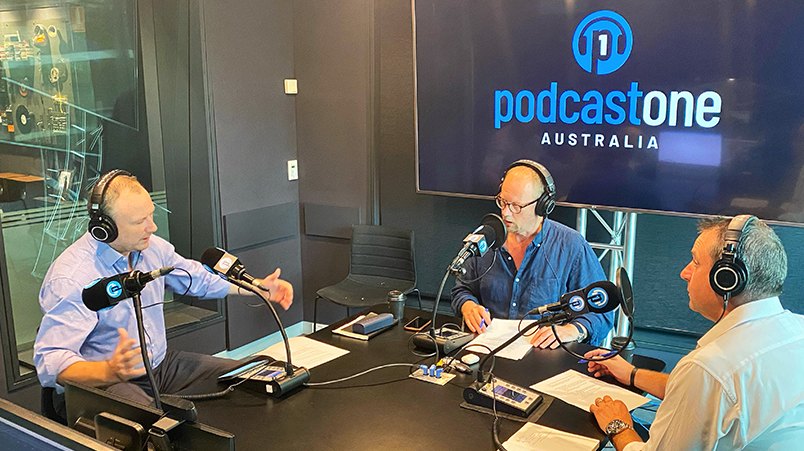 New Australian CEO Mark Coad and APAC boss Leigh Terry want to diversify beyond media via the data and tech capabilities at Acxiom and a new 100-strong martech and data platform, Kinesso. The former Omnicom duo dispute that media agencies are

There's a lot of sharp, nuanced insight in the podcast that adds depth to the text below. So get ahead of the curve and go deeper. Listen here.

IPG Mediabrands Australia CEO, Mark Coad, and his new boss, Leigh Terry, go back a long way. Both were seen as dyed in the wool Omnicomers, until Terry was wooed by then IPG global CEO Henry Tajer in 2016 to become Asia Pacific CEO.

After Danny Bass stepped down from IPG Australia last February, Terry took the reins as caretaker before moving for then PHD CEO Coad. Along with Peter Horgan, Coad and Terry formed the leadership axis at Omnicom Media Group, laying foundations that enabled the group to weather local headwinds better than most holding groups.

Now they are aiming to repeat the trick.

Terry says it was an easy decision to hire Coad, who he says has a unique “ability to absorb stress” and shield his teams from the worst impacts of pressure. The culture they built at OMG is something both are hoping to replicate.

“We’ve worked together, we know how we work together,” says Terry. “His ability to create calmness within a team, create a direction and also have a bit of fun along the way were what I enjoyed most of our time working together. So I know that he can do that and I know he’s going to have a ball doing it at IPG.”

Terry says the group did not have to rush to appoint a CEO because of the strength of the agencies, as evidenced by a string of recent wins, including David Jones, K-Mart, Goodman Fielder, Swinburne University, Deliveroo and Aussie home loans.

As such, Coad thinks IPG requires incremental improvement and strategic oversight rather than wholesale change.

“The business does not require surgery. It’s poised; it’s got momentum, it’s got really good leadership” says Coad. “But there’s work to be done in terms of arranging what we’ve got, setting some direction, providing some support to the leaders that are there.”

Improve those aspects, he says, “and I think we’ll go a whole lot further,”

Of his own situation and change of allegiance, Coad says the timing was right, and his work was mostly done.

“I’ve always worked in environments where I’ve tried to leave them in a better place than I found them.  That’s an internal mantra of mine and I just felt that we’ve achieved that and it was time for someone else to have a swing,” says Coad. “Where to go [next] had been rattling around in my head for the last six months. When the opportunity came up, it was a no-brainer.”

While many of the holding groups are busy restructuring their businesses, nationally and internationally, Coad rejects suggestions that media – both agencies and owners – are in crisis.

“I’m not sure I share your pessimism. The more complicated this industry becomes, the more opportunity there is,” says Coad. “There are definitely companies that are doing it tough, and there’s reasons for that. But that’s their business more than it is mine,” says Coad. “As far as this company is concerned, there is opportunity, and I’m very optimistic about that.”

Coad acknowledges that media owners are getting a smaller share of spend, as budget is diverted into other parts of the marketing mix and technologies.

“But I don’t necessarily subscribe to the fact that total marketing efforts are down. Most advertisers still have the same budget - they are just doing more things with it. Inherent in that is the opportunity for media agencies because we’re doing a lot more in that [adtech/martech] space.  We’re doing more than we’ve ever done and we’ll continue to do more,” he suggests.

Leigh Terry says the rise of Salesforce and Adobe in tandem with audience fragmentation mean it is no surprise that “media owners in their traditional sense are under increasing pressure.” But he says some are rising to the challenge.

“If you look at something like Nine Entertainment over the last few years with its acquisition strategy, it is now taking more dollars from more places.  So as much as we talk about fragmentation, there will be increasing consolidation on the media owner side.”

For all the talk of opportunity, there is no doubt a tough year ahead for agencies, media owners and the broader market.

While there are “pockets of positivity” across Asian markets, Australia’s GDP forecast at the turn of the year was not much above 2 per cent and looks set for further revision. Consumer spending is at a four year low, business confidence is even worse – and that presents a fundamental economic challenge, says Terry.

“I saw the Roy Morgan data for January and business confidence is the lowest it’s been since 2010 [which is as far back as I looked]. That is the nub of the issue, because that knocks on to conversations between CMOs, CFOs and boards in terms of what they’re willing to sign off, appetite for risk and appetite for expansion,” says Terry.

“That absolutely has a direct correlation to unlocking marketing budgets and therefore, has implications for media agencies, creative agencies and clients.”

On the back of the bushfires and floods, the Coronavirus looks likely to wreak further economic damage. Terry says its impacts will be felt beyond China and growth forecasts for both Australia and New Zealand have been lowered in recent days.

Categories such as travel and tourism will feel the hardest immediate hit. Automotive and consumer electronics firms will also likely feel the impact of supply chain disruption.

“From an advertising perspective, in moments of uncertainty, people retreat back to safety. That means probably reducing spend rather than increasing spend,” says Terry.

“As much as I’m a generally positive person, I believe that if this continues through Q1 and into Q2, we’ll have some demonstrable impact on client spend, particularly those fiscal year client spends that are being debated in February and March to be locked in for the July-June [accounting period].”

In macro economic terms, what will be will be, says Coad.

“What we are seeing around the world at the moment will have an impact. Nobody yet knows what it will be. But to be honest, I am just looking forward, it’s about getting stuck in.”

Meanwhile, he and Terry think IPG’s recent investments in data and tech could help them weather what is shaping up to be the perfect storm.

Eyebrows were raised when the group paid USD $2.3bn for Acxiom in 2018. Some analysts - and rivals - suggested IPG had overpaid for a business perceived to be heavily reliant on third party cookies.

“First party data is critical in helping clients achieve their own ambitions with their own data. That to me is why Acxiom is such a jewel in the crown,” he says.

“So whatever our competitors may or may not be saying, the acquisition strategy is absolutely right – and that is playing out from a Wall Street perspective as well.”

Launched last October, Kinesso represents IPG’s attempt to put Axciom’s data and Cadreon’s activation to greater effect. It also takes in data from 16 other providers and is reportedly being used by agency groups to help win pitches as well as promising sharper results for marketers.

Coad thinks the tech and data IPG is now putting in place “will move us away from [trading on] demographics in the long term” and says technology-driven operating models will soon form “the central nervous system” of any media agency.

That means other parts of the industry may need to adapt.

“We’re still buying demographics and piling up TARPS on free to air TV, but that is going to change,” says Coad. He suggests IPG may not wait for the market to coalesce around a preferred approach or set of metrics.

“The market has to move in unison in some areas, because there has to be a currency at some point. At the moment, we are using demographics as a currency to put a value on television airtime, for example. But at the same time, I think agencies as a point of difference are going to be developing their capability to take data, build specific audiences for their clients and use technology to put the right message in front of that audience at the right time - because that’s ultimately what we’re all here trying to do,” says Coad. “So I think that is going to be fascinating to watch.”

Yet media agencies and owners have been talking about addressable TV for what seems like eons.

“Well, it’s going to happen. It has to happen,” says Coad. “Why would I sit there and blaze away at grocery buyers with children aged 5-12 on a sample size of 2,000 households when I can specifically tell you exactly who those people are? I now have the capacity to execute and reach them with precision on a mass scale. So why would I buy a demographic?”

Indeed, why would we. Leigh Terry, however, is giving nothing away for now.

“All I would say is watch this space from a Kinesso perspective, having the right tools to do this.”

But he underlines the point that some agency groups may not wait for the market to get its act together.

“Does the industry need to move in unison to create a change? No,” says Terry.

“I think if you have one group and one client, or set of clients, that can create the necessary [impetus] to drive much bigger change.”