Sport lures brands back to TV but discounting race is on 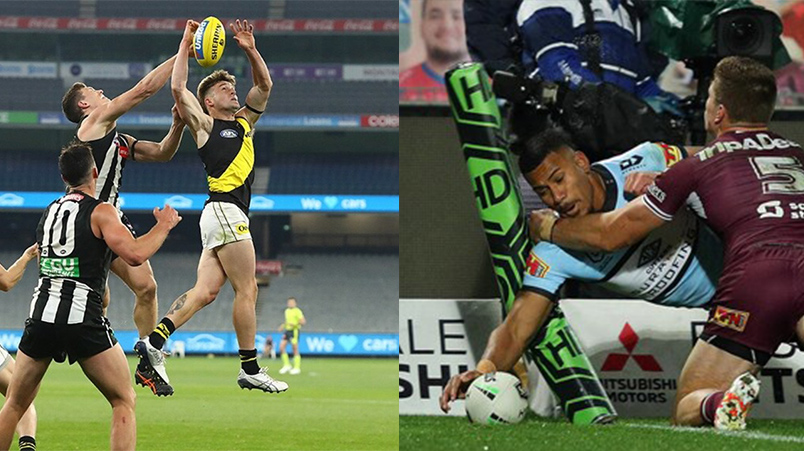 Live sport is back on free-to-air TV and Foxtel as the dominant codes of NRL and AFL provide another welcome influx of viewers for their respective broadcasters. Here's everything you need to know about the current play across sponsors, ratings and deals.

If you were a sports nut at the start of the year but weren't a fan of Belarusian football, chances are by April you may have found yourself rooting for Minsk, FC Dynamo Brest or Neman, as the world of live sport came to screeching halt.

Up until a month ago, executives from the National Rugby League (NRL) and Australian Football League (AFL) had been working to get their respective codes back on air.

While NRL boss Todd Greenberg exited the business, both codes have since resumed their respective seasons - the NRL returning first following 67 without a game.

Seven, Nine and Foxtel all resigned deals with the codes, as the pay-TV provider opted to extend its contract with the NRL, taking it's rights deal through to 2027.

Both Nine and Seven secured a 25% and 19% discount, respectively, from the renegotiated deals.

One source stated discounting had reached up to 50% for one AFL broadcaster, while another noted that the reduced rates were in line with the ad revenue declines - which according to SMI figures this week hit 40% for May.

The subsequent returns of each code have yielded strong opening audiences results for the codes across all broadcasters.

For Nine, the NRL season has shown a steady increase on the opening two rounds of the season post-Covid:

Nine's Sales Director - Sports, Matt Granger told Mi3 that brands were excited by the return of the NRL and the casual ad market has spiked.

"There was always going to be a need to re-invest," says Granger. "Live sport is one of those rare areas of media that has little to no competition when it comes to audience engagement, bar reality TV."

"We've seen brands, in some instances, double down on their spend. While this isn't something new and has been done in the past, the need to be involved with live sporting codes has certainly been amplified by its hiatus but also by the limited access to other high-reach mediums that have been impacted by Covid."

The network is also preparing for an adjusted State of Origin series, taking place this November as opposed to its previous July run.

Granger says this has brought new advertiser interest into the NRL including different retail sectors and domestic tourism.

"The timing of Origin this year certainly ties in the with Christmas sales and holiday period, which is why we've seen interest from the two this year, certainly more than previous years," he says.

"Overall, the change gives plenty of marketers a time to reset and reboot their brand proposition at a time when consumers are most likely to engage, so it will provide a unique insight into what sport's impact can have at any time of the year."

Seven's chief revenue officer Kurt Burnette says the network has been "over-indexing" on audiences since the season re-launched last month and rejects claims of discounting.

"AFL audiences are up and the network isn't putting rates up, making AFL CPMs look very buyable - but we aren’t discounting," Burnette told Mi3. "We have limited supply and close to fully subscribed sponsorship and sold-out games.

The network has seen strong gains in the traditional NRL markets in 2020 with Brisbane up 49%, the biggest gains of any market. Sydney is currently up 19%.

Burnette says this is due to the overall role sports plays in the psyche of Australian TV viewers.

"Going into H2 we are facing the biggest half of sport that I think Australia has ever seen," he told Mi3.

"Each broadcaster has got strong performances across both of the codes since launching again. Couple this with the hopeful return of cricket, with India touring here, and we'll start to see strong signs of life in the ad market return."

Burnette says all of the major sponsors for the AFL returned, except for one, highlighting the value proposition live sport plays for key national brands.

He says there was also a wave of interest in other advertising packages that "more than made up for" the loss of an initial sponsor.

"It's not right to say we are heading back to 'normality' because it's unlikely things will be the same going forward," Burnette says.

"What we do have here is a marker that shows brands are ready to come out of hibernation and back consistent audience delivery and reconnect with a large group of viewers who have also been starved of a big part of culture and conversation in Australia."

For Foxtel, the return of live sport couldn't have come quick enough, with sign-ups to its fresh-faced streaming service Kayo taking a considerable hit.

It's no secret its sports package is also the significant drawcard for its primary set-top box service.

With the major codes underway, Foxtel Media Sales and Brand Partnerships Director Martin Medcraf says audiences are back with a vengeance, as collective numbers across the Foxtel and Kayo brands deliver stronger audiences than its free-to-air counterparts.

Figures for Foxtel's coverage of the NRL and AFL below:

Medcraf says, like Nine and Seven, all of Foxtel Media's sponsors had returned across both codes. It had also picked up four new clients such as Ladbrokes and Red Rooster.

He says this means there is now a QSR brand associated with Foxtel's live sport offering every day of the week.

"There's no doubt it was something we needed back, it wasn't a secret but we also differ from our free-to-air counterparts, with two dedicated 24-hour channels for AFL and NRL," Medcraf says.

"We didn't lose a sponsor for a single show. That's something to be said not just about the power of live sport but also the strength of our offering for sports fans."

Medcraf says the conversation about clients returning "wasn't a difficult one", adding that many were keen to be part of a unique and unseen sporting calendar.

He says Foxtel now has a new sport restarting every week, creating the biggest sporting second half ever. This includes the A-League and Super Rugby, which Foxtel had previously stepped away from.

"This is something vastly different from any other sports package on TV," Medcraf says.

"That's why we've also been developing shorter-term sponsorship models, as we know if we can give those previously unassociated clients a taste of what we have, they'll understand the full potential, especially at a time where building brand equity is vital."

GroupM Chief Investment Officer Nicola Lewis says the NRL and AFL starting back up again offers a "real sign of green shoots" and positive momentum going into the second half of the year, not just economically, but socially too.

"A lot of advertising and media spend activity is pegged to sport across categories such as telco, QSR, and even travel so it’s good news for advertisers, and for audiences," Lewis says.

"They might not be able to attend the games, but people will get their mates around, and watch sport on TV."

Carat's Chief Investment Officer Craig Cooper says the advertising market should be using TV as the barometer for spend, with the return of live sport acting as one of the first major dominoes that marks improved marketer and brand confidence.

He says it has also been the jumpstart that verticals, such as wagering and alcohol, have been waiting for, as restrictions around where they can advertise is limited primarily to sport.

While both sectors have been able to continue there activity throughout lockdown, primarily through the horse racing industry, Cooper says these categories, alongside other dormant national advertisers, are preparing for a strong advertising push.

"Many clients were eager to engage with sports once more, as they know just how starved audiences have been for their weekly fix," Cooper says.

"The figures from both codes reflect this and nearly every brand we work with that paused activity during the initial lockdown has switched back on and is keen to return to previous levels of spend, where possible."

Even though many brands are already active, Cooper says retail is still going to struggle with its plans to return.

He says credit insurance for many retailers is being heavily investigated given the recent declines in in-store sales and brands that have fallen into administration.

Most credit insurance is measured on the strongest 3-month period of advertising by a brand or relevant sector but reports indicate that this is being significantly lowered by insurers over recent months.

"This decline or lower-valued insurance levels will leave some retailers, which regularly advertise during live sport and TV in general, at a distinct disadvantage," Cooper says.

Publicis Media Commercial Director Jodi Fraser says 90% of her agency's portfolio, which is primarily made up of FMCG clients, has returned to normal levels spending on live sport.

However, she says the group hasn't seen an increased spend with the broadcasters but rather the "unpausing" of previous activity.

"We haven't experienced any over-spending or increased investment from our key clients, however, all have come back in some way," Fraser says.

On re-negotiating existing sports sponsorship deals, Cooper says agencies aren't trying to pressure networks into providing cheaper arrangements but didn't rule out a reassessment of current contracts, due to the shortened season and changes to staple events such as Origin.

Lewis says sport will continue to offer valuable and unique engagement with audiences, but COVID-19 has impacted all elements of sports, from players and teams, through commercial partnerships, rights holders and broadcasters and so every element has to be reviewed.

"When it comes to the deals and partnerships negotiated by sponsors and advertisers, each has a different set of circumstances, and GroupM and our agencies have been carefully working with our clients and with our broadcast partners to ensure that all activity is planned and executed to maximise the return and drive growth in the context of this new normal," Lewis says.

According to Fraser, one of the next elements to examine as codes such as the NRL and AFL draw to a close will be how broadcasters and agencies negotiate based on audience figures.

She says traders will look to find the most suitable comparable figures available to maintain their investment positions.

Medcraf said it would be something that Foxtel took into account next year but urged agencies to be mindful of the overall situation with a balance of current and previous year figures.

Granger says that while it could be an issue, it hadn't yet been discussed with agencies at this stage and believed it to be an unlikely factor in significantly shifting how Nine negotiated the 2021 season.