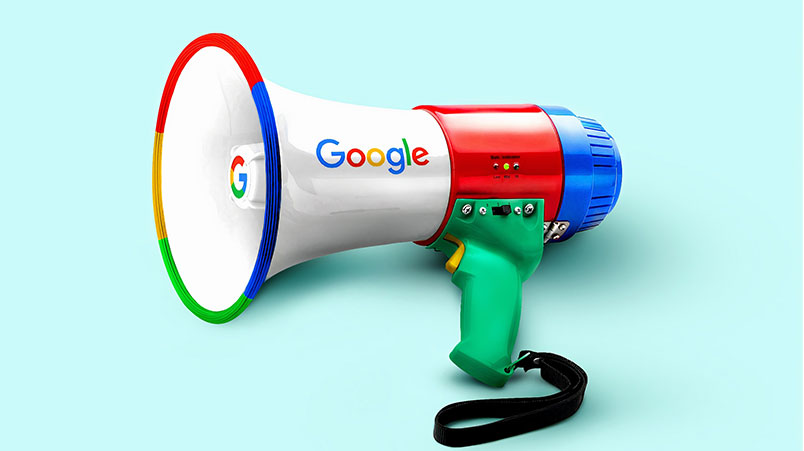 A bristling Google boldly took on the Federal Government and the ACCC yesterday in an 'Open Letter' to Australians warning their data, Google Search results and YouTube "will be worse for you" because of a new code  forcing it to share revenues with media companies and give them advanced warning to algorithm changes. Within hours, the competition regulator fired back, accusing Google's campaign of "misinformation" while others labeled it a "cynical ploy" and "misleading".

A shot across the bow

Google lashed out at the Australian Government on Monday, taking umbrage directly to the Australian public over a new draft code forcing big tech platforms to strike revenue share deals with Australian media companies for news and risk fines of up to $10m if they don't treat them fairly. The digital platforms will also need to give media companies 28 days notice if any changes to their algorithms are likely to materially affect traffic to news sites.

"We partner closely with Australian news media businesses — we already pay them millions of dollars and send them billions of free clicks every year. We’ve offered to pay more to license content.

"But rather than encouraging these types of partnerships, the law is set up to give big media companies special treatment and to encourage them to make enormous and unreasonable demands that would put our free services at risk."

Silva concluded the letter by adding the public will "hear more from [them] in the coming days".

Mi3 approached Google for further clarification and whether it would launch a similar public awareness advertising campaign run by China-owned TikTok. In the US, Chinese ownership of TikTok must end in the next four weeks or be shut down.

Google did not respond at the time of publishing. Last month, TikTok took out several ads with major Australian publishers to express its position over data privacy and concerns surrounding its ties with the Chinese Government. 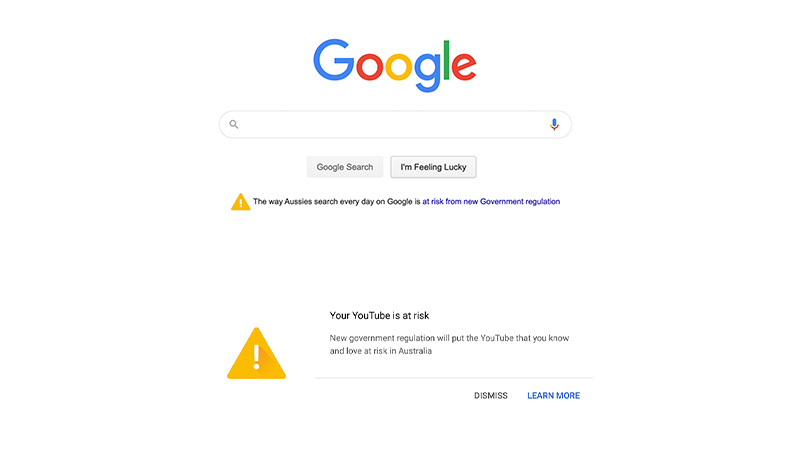 Already, major industry bodies and publishers have fired back at Google.

At the time of publishing Commercial Radio Australia, Seven Network and News Corp had no comment while Network 10 had not replied. But the ACCC, Nine and FreeTV's responses are below:

"The open letter published by Google today contains misinformation about the draft news media bargaining code which the ACCC would like to address.

Google will not be required to charge Australians for the use of its free services such as Google Search and YouTube, unless it chooses to do so.

This will address a significant bargaining power imbalance between Australian news media businesses and Google and Facebook."

(Editor's note: It's also worth reading Mi3's coverage of a press briefing in late July with ACCC chair Rod Sims on why he was taking Federal Court action against Google on alleged breaches to online consumer tracking and privacy and the use of deceptive mechanics to gain user "consent". This briefing includes an insightful transcript of the Q&A session between Sims and journalists from The Australian, The Australian Financial Review, Reuters, The Sydney Morning Herald, The Age and MLex. It lays out the important - and unfiltered - context around the ACCC's rationale for taking on Big Tech.)

Free TV Australia said that the deliberately misleading “Open Letter to Australians” published by Google highlights why the mandatory Code is "urgently needed".

The industry body also labelled the move a "cynical ploy" to "mislead and frighten" Australians, further highlighting the need for stronger regulation.

“Google has shown once again how important free, strong independent news media industry is in Australia so that they can hold Google to account for pushing such deliberately inaccurate information to its users.

These are the statements and actions of a monopolist flexing its considerable muscle to try and divert attention from the real issue - paying a fair price for the news content that creates value for the platforms.

Google’s letter is straight out of the monopoly 101 playbook trying to mislead and frighten Australians to protect their position as the gateway to the internet. We’ve seen this kind of tactic before from big businesses trying to stop regulators from evening up the playing field so that they can hold on to excessive profits. Hopefully they will not succeed."

A statement from Nine said:

“It is disappointing that the global digital platforms are highlighting selected elements of the draft Code and presenting them in a way which does not accurately reflect the framework in which the draft Code will operate.

At Nine we maintain our position, which, at its core, means our premium journalism and content have a clear monetary value which these platforms should remunerate us for. We look forward to working with the ACCC on finalising the Code and then negotiating a fair outcome for our business with the digital platforms who will be subject to the Code.”

"Google's open letter is misleading - nothing in the draft code will force Google to hand over consumer data to publishers as is falsely suggested, or provide a 'dramatically worse' Google Search as falsely claimed, let alone YouTube that is not even covered by the code.

What the draft code does do, however, is correct the imbalance in bargaining power that currently exists between publishers and platforms so that we can negotiate fair payment for the substantial benefit the platforms receive from our journalism."

In a statement to Mi3, the tech giant has clarified its position on key points of contention around its claims that its free services are at risk and the ACCC's points yesterday that Google "will not be required to share any additional data with Australian news businesses unless it chooses to do so."

On the use of free services:

ACCC: "Google will not be required to charge Australians for the use of its free services such as Google Search and YouTube, unless it chooses to do so."

Google: "We did not say that the proposed law would require us to charge Australians for Search and YouTube - we do not intend to charge users for our free services. What we did say is that Search and YouTube, both of which are free services, are at risk in Australia. That’s because the Code as it is drafted is unworkable. For example, the Code requires us to give all news media businesses advance notice of algorithm changes and explain how they can minimise the effects. If we were to comply with this provision it would seriously damage our products and fundamentally alter the way ranking of search results works across Google Search and YouTube."

ACCC: "Google will not be required to share any additional user data with Australian news businesses unless it chooses to do so."

Google: "The Code requires Google to give news media businesses information about the data users share with us and “how the registered news business corporation can gain access to” that data (see section 52M (2e) / page 10 of the draft code). This goes beyond the current level of data sharing between Google and news publishers. It was echoed by the Treasurer [Josh Frydenberg] who stated: “Among the elements the Code will cover include the sharing of data, ranking and display of news content and the monetisation and the sharing of revenue generated from news.”

"We need to let you know about new Government regulation that will hurt how Australians use Google Search and YouTube.

A proposed law, the News Media Bargaining Code, would force us to provide you with a dramatically worse Google Search and YouTube, could lead to your data being handed over to big news businesses, and would put the free services you use at risk in Australia.

You’ve always relied on Google Search and YouTube to show you what’s most relevant and helpful to you. We could no longer guarantee that under this law. The law would force us to give an unfair advantage to one group of businesses - news media businesses - over everyone else who has a website, YouTube channel or small business. News media businesses alone would be given information that would help them artificially inflate their ranking over everyone else, even when someone else provides a better result. We’ve always treated all website owners fairly when it comes to information we share about ranking. The proposed changes are not fair and they mean that Google Search results and YouTube will be worse for you.

Your Search data may be at risk

You trust us with your data and our job is to keep it safe. Under this law, Google has to tell news media businesses “how they can gain access” to data about your use of our products. There’s no way of knowing if any data handed over would be protected, or how it might be used by news media businesses.

Hurting the free services you use

We deeply believe in the importance of news to society. We partner closely with Australian news media businesses — we already pay them millions of dollars and send them billions of free clicks every year. We’ve offered to pay more to license content. But rather than encouraging these types of partnerships, the law is set up to give big media companies special treatment and to encourage them to make enormous and unreasonable demands that would put our free services at risk.

This law wouldn’t just impact the way Google and YouTube work with news media businesses — it would impact all of our Australian users, so we wanted to let you know. We’re going to do everything we possibly can to get this proposal changed so we can protect how Search and YouTube work for you in Australia and continue to build constructive partnerships with news media businesses — not choose one over the other.

You’ll hear more from us in the coming days — stay tuned."