Don’t be fooled into thinking an ad will have the same impact in cinemas because of screen size.

How many times have you heard this one: people under 40 don’t watch TV. More times than you care to count, right? It’s boring but worse than that, it’s dead wrong.

In the latest iteration of this trope, we’re told under 40s have “had enough of TV” preferring to head to the cinema instead.

Don’t get me wrong, I love a good movie. But I go once a month when I can. As long as the experience offers a fair value exchange for the $20 admission price and the extra $15 for popcorn and a choc top, who doesn’t love a trip to the flicks?

But that’s private Kim. Professional Kim who looks marketers and their agency partners in the eye every day knows the occasional cinema visit isn’t going to deliver the audience needed to drive business impact today, or in the near future, which is what brands investing in media want.

So, what does genuinely impactful media deliver?

OzTAM data shows us that every day, 443,000 people under the age of 40 are watching TV. This cohort is engaged with broadcast TV for two hours and 10 minutes. That’s every day. In a week, they spend the equivalent viewing time of Daniel Craig’s Bond back-catalogue watching TV.

In March this year, 57 per cent of Aussies under the age of 40 watched TV compared to just 16 per cent who went to the movies. That means TV delivered more than two times the audience every day for brands keen to connect with customers.

According to Roy Morgan data, in January – the highest cinema-going month on record so far this year – 56 per cent of under 40s were watching TV while only 20 per cent visited a cinema.

By comparison, in 2019 pre-pandemic, 30 per cent of under 40s went to the movies compared to 80 per cent that watched TV. So in good (and bad) years TV delivers the reach advertisers are looking for.

TV commands the attention of under 40s with research by Nielsen finding 40 per cent of millennials notice the ads on TV, a quarter finds them interesting and a third search for the products they have seen being promoted.

And the Benchmark Series shows the big screen effect of TV has a powerful impact on memory encoding with an ad on TV that fills the whole screen ensuring the content is embedded into the viewer’s long term memory better than an ad that fills up 10 per cent of the screen.

But don’t be fooled into thinking an ad will have the same impact in cinemas because of screen size. That’s only half the equation. Advertisers need high-velocity reach which is where TV really shines. For return on investment and volume contribution to sales you just can’t beat TV. 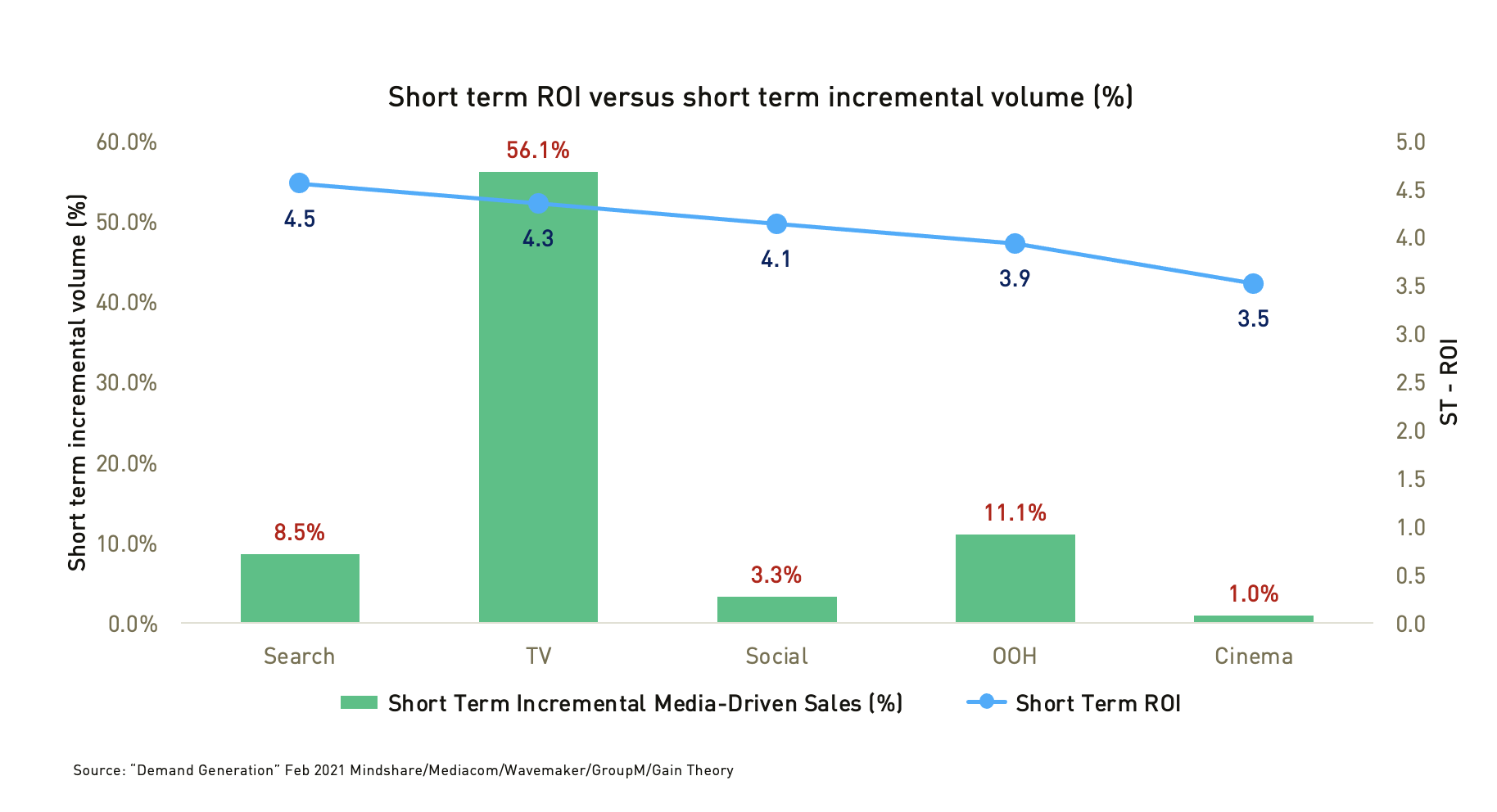 Content made by Australia’s television networks is in hot demand with under 40s. From MasterChef to MAFS, Big Brother to The Farmer Wants a Wife, TV drives water cooler conversation. Granted, less of us are gathering around a water cooler because of the endless yoyo of lockdowns so these discussions happen in other forums – across social media and other digital platforms, between friends and family members.

Because that’s the thing about TV: it’s a shared viewing experience. It’s not an “audience of one”. Roughly 42 per cent of linear TV is co-viewed which means more than one person is watching and for connected TVs, approximately 95 per cent of viewing minutes occur with one, two or three people watching. With co-viewing numbers like this, it will be interesting to see if big studios continue to release first-run movies on SVOD services as we emerge from the pandemic.

When weighing up the benefits of one channel over another, you also want to consider the risk factor. Investing in channels that demonstrate – time and time again – that they’ll deliver results is the smart play.

The Payback Series research found that digital video and TV have the lowest risk of all the channels which is attributable to consistent performance and quality of content to deliver return and sales uplift. The riskiest channel is cinema beating out social media.

Rather than believing everything you hear, look at the facts

The reason for that might be the hit and miss nature of the content. After all, for every Harry Potter movie, there’s a Wonder Woman 1984.

So rather than believing everything you hear, look at the facts. You’ll find the truth about youth is they’re massive fans of telly and it doesn’t hurt that it’s a pretty effective advertising medium too.

How much should advertising attention cost by screen and platform? Australian cross-platform CPM measurement trial goes global
What the ad world needs now is combined TV and digital love
Why brands, ad holding companies - and whisper it, Facebook - are moving on an attention metric (beyond 1.7 seconds)
Covid digital media and entertainment surges for women: brands drive 40% increase in briefs