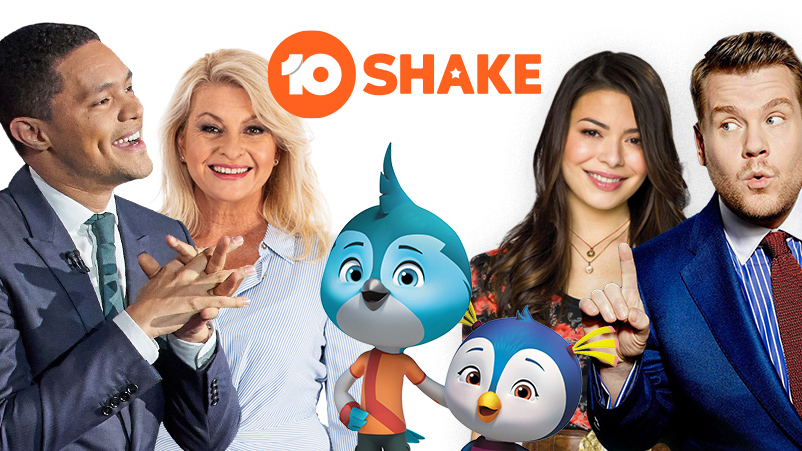 Network 10 and its international owners ViacomCBS are launching their fourth multichannel in September. 10 Shake will not only offer a revamped content spine with a 50/50 split between adult and children’s content but also much lower ad volumes that are not going to be offset somewhere else in the schedule.

Prosser says it will make 10 Shake unique from the rest of the multichannel players, along with a very different content slate.

Prosser says the network will be running significantly reduced ad loads within break exclusively for launch partners such solus and smaller ad pods.

These pods will be known as ‘Shake a Break’ and provides advertisers with a new form of “advertising architecture” that will provide premium brand opportunities.

While the network is still finalising the exact format ahead of September launch, Prosser says in some cases adloads will go even lower during day time.

“There's going to be a lot of content now that will be free of ads because obviously when you're talking to pre-schoolers you can’t advertise the same way you would to adults,” he says. “The commercial content or inventory will be less than other channels and we think that's really good.  These younger audiences want to see less interruption and that’s something we will continue to provide throughout the day.”

Prosser says while there will be the opportunity for brands to advertise with more frequency in later slots, the network won’t “make up the minutes lost” during the children’s programming block.

“We'll be really smart around how we how we actually engineer that and what the architecture of the ad breaks look like and we'll play around with that,” Prosser says.

“We're obviously still governed by how we roll out that 13 minute per hour of advertising  in some cases but our intention will be to take more creative license with how the breaks are structured. The intention is to have an offering that matches the audience.”

“The launch of the new channel gives us the opportunity to reach a somewhat untapped market for us, particularly when it comes to gaming, beauty, toy retailers and tech companies.

“We know since working with the Nickeloden and MTV brand since May that here is a huge appetite for these brands to find mass-scale in a premium environment. That’s what 10 Shake will do for them.”

He says the intention isn’t to cannibalise content airing on 10’s other main and multichannels - with the expectation it will eventually eat into competitors.

Monaghan says the intention wasn’t to do a full scale dedicated children’s play but do something that provided a rounded out content slate that capitalised on the vast content library housed under ViacomCBS.

“We certainly want a piece of that children's pie, given no one, particularly on commercial free to air, does such a wealth of well-known kids' content in that in the daytime,” Monaghan says. “But of course it’s important for us to have that other part of the puzzle, that we know will add more to the viewing and advertiser experience.

“I think we can find a way through that doesn't then add in breaks unnecessarily but still create the same amount of revenue that we would make in a normal base structure, then we’re doing something very unique for everyone.”

Carat’s Chief Investment Officer Craig Cooper says another FTA channel launch is a boon for advertisers - in particular one with a focus on youth.

He says brands looking to target under 25 year olds will be very happy to see there is a new dedicated, potentially high reach platform within a brand safe territory.

“Few ad loads is a benefit, but if this channel follows the launch process of other secondary channels, we should see this rebalance over time,” Cooper says.

“This launch however is an opportunity for clients to strategically partner with the network from the launch and capitalise on steady growth in audiences. This channel launch suggests that Network 10 is following through with their Upfront’s promise of winning the under 50 year old demographic.”

Menulog CMO Simon Cheng says the argument for shorter adloads has always been more engagement with the brand, better recall and less clutter, which he says would naturally be of benefit to the Menulog brand.

He says new channels are always positive if there is a clear value proposition attached to it, adding that Network 10 has made a very bold move to launch what looks like the “youngest channel on free-to-air”, which will set it apart at launch.

“For advertisers, it will provide an alternative to online, social and digital video, which currently gets the lion share of the youth advertising,” Cheng says. “10 Shake offers Menulog the opportunity to reach more 18-25s with the later programming, which is certainly something that appeals to our current media strategy and the “Snoop Dogg Did Somebody Say Menulog” TVC.

“However these benefits would need to be assessed against the premium charged for the spots in order to determine ROI and value for Menulog. Given how premium the Snoop Dogg campaign is, shorter adloads would work well for this content.”

Running from 6am – 6pm will be a non-stop block of kid’s favourites, including the long-running ViacomCBS hit including SpongeBob SquarePants, as well as other major franchises like PAW Patrol and Henry Danger.

After 6pm the shift occurs and adult programming hits the airwaves, with the likes of international juggernauts James Corden’s The Late Late Show and South Park leading the line-up, alongside “guilty pleasures” Ex On the Beach and Lip Sync Battle.

The line-up of content for 10 Shake is listed below:

Plus, Network 10’s popular local kids shows including Totally Wild which celebrates its 28th year, preschool show Crocamole and Australian made C classified dramas will make the move from 10 Peach over to their new home on 10 Shake.

10 Shake will also feature movies including The Matrix franchises, The Hunger Games (1 and 2), the Ocean’s series, The Lego Movie, Now You See Me 2, Office Christmas Party and Ready Player One.