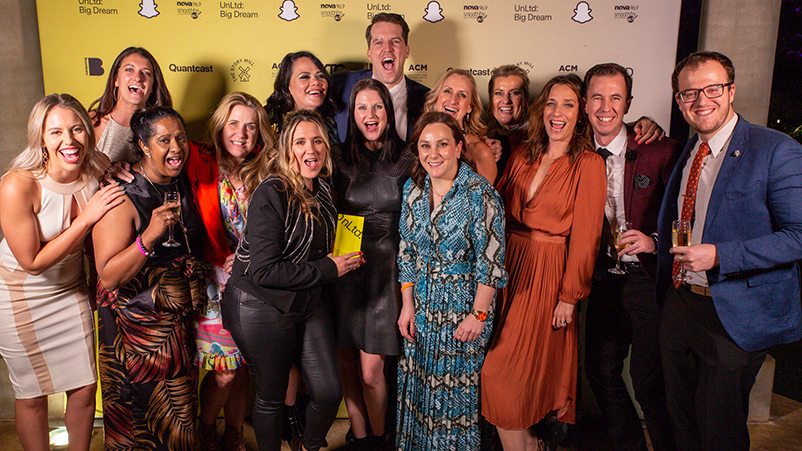 GroupM was chosen as the 2019 inductee to the UnLtd: Hall of Good at the Big Dream event last week, following last year's inaugural inductee Network 10.

“We’re lucky to work with over 150 amazing organisations across our industry using their skills and resources for good," said Rachel Troy, COO of UnLtd.

“Whilst we’d love to award every single one of them, there is one organisation whose commitment, effort and impact over several years needs to be recognised.

“GroupM has used their best strategic heads to work on our charities biggest challenges, provided creative resource to re-brand and accessed inventory across their networks. They organise trivia nights, basketball tournaments, gig nights and once a year, they close their entire network of agencies for a day to raise funds for UnLtd charities. They have a long-standing workplace giving program and have changed the lives of marginalised young people in a very concrete way – by giving them a job. And the continuous effort shows – so far, they have generated over $5 million worth of social impact to help young people at risk.”

Mark Lollback, CEO of GroupM Australia and New Zealand, said the group was “delighted” to be recognised. “With the help of UnLtd, we’ve been able to direct our efforts to areas where we can create the biggest impact,” said Lollback. “We’re proud that our business is powered by amazing individuals who drive these programs and are part of a network of passionate people who go above and beyond their day to day job to give back to those who need it the most.”

A special ‘UnLtd: Campaign for Good’ award was also awarded to Ogilvy for its work on creating the first-ever brand awareness campaign for Whitelion that was widely supported by the industry with over 30 media owners and agencies providing pro-bono support and inventory.

Chris Freel, CEO of UnLtd commented: ”For 12 years, UnLtd has been bringing together the skills, talent and resources of our incredible industry, to help young people at risk. This year, we saw this uniting power really come to life through the amazing support we received across the industry for the Whitelion ‘Invest in Me’ campaign. None of that would have been possible if it wasn’t for the commitment, creativity and passion by the Ogilvy team to create a campaign that not only raises funds but changes perceptions of young people at risk. Big thank you to David Fox and the team at Ogilvy and for every organisation who supported the campaign.”

The biggest names in rugby league are joining the new Wide World of Sports radio show this month. The man regarded as the...

UnLtd, the industry’s social purpose organisation, is expanding its operations to Western Australia with Carol Morris...