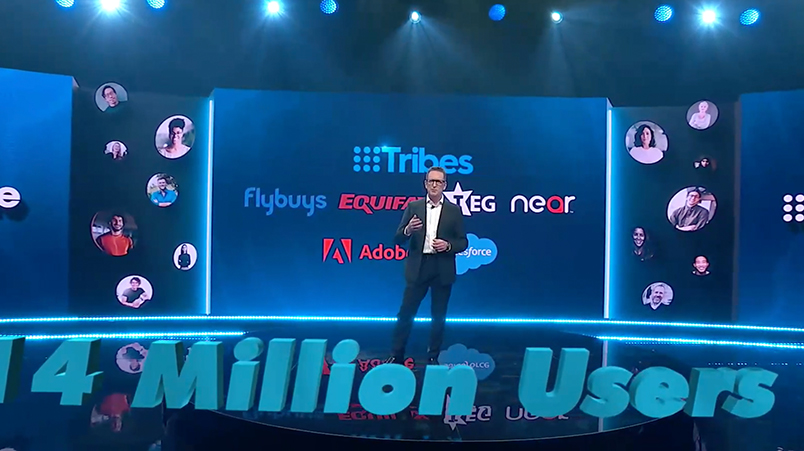 The bigger the active number, the better the chance of audience matching: Sales boss Michael Stephenson says Salesforce deal means Nine has most of market covered.

About 5,000 people yesterday tuned in live for Nine's 2022 Upfronts presentation, positioning itself as "Australia's media company" and rounding out its push into "people-based marketing" with a Salesforce deal alongside those already struck with Adobe and LiveRamp to match 14m logged in users with advertisers' first party customer datasets. Nine firmly put advertising attention metrics on the map – an emerging field which adds an advertising efficacy layer over simple audience reach and impressions measurement. It comes as backroom skirmishes have started with arch rival Seven over how many "active" logged-in users the media groups have versus their total numbers.

Nine last year headlined its upfronts with a “world first” audience matching deal with Adobe, hailing the partnership as a “game changer” that would enable it to take on Facebook and Google.

Yesterday the network confirmed a similar arrangement with Adobe’s fierce rival Salesforce, but sales chief Michael Stevenson said that was “always part of the plan”.

Sceptics will draw their own conclusions – but in fairness, Stephenson last year indicated Nine was keeping its options open even as it announced the Adobe deal. Plus, Salesforce’s customer data platform (CDP) didn’t launch until a month later.

Either way, the network now has most of the market covered while hedging its identity-matching bets.

But a year on, how has the Adobe deal gone? Details are scant other than a showcase figure from Nine's founding Adobe partner, Coles, in which store visitation lifted 44 per cent among Coles customers that had been matched and targeted via the Nine-Adobe alliance.

Suncorp and Hesta were two other companies Nine said were onboard via Adobe.

Stephenson said a "long, long list of clients that are Adobe Audience Manager or Experience Cloud customers" are using Nine. In Australia, Adobe is generally considered to be ahead of Salesforce for marketing teams, although the latter is aggressively chasing growth targets. Stephenson avoided commenting on that arms race.

"I don't have the specific detail around that but when we launched [Adobe] Audience Match, we always knew you needed to build a product that could be accessed by all providers," he said. "It was always part of the plan we had to roll out across other platforms. Between Adobe, Salesforce and LiveRamp, that's pretty much the entire market for people-based marketing."

Nine is now pushing its credentials as a "full marketing funnel" provider to marketers led by linear TV and BVOD at the top and middle driving consumer awareness and consideration and 9Now bridging to performance and targeting lower into the funnel for customer conversion and performance marketing.

Stephenson would not be drawn on whether the Adobe partnership had enabled it to compete with Google and Facebook on ‘people-based’ marketing at the lower end of the funnel – e.g. by matching brands’ hashed customer email addresses with Nine’s own logged-in audience IDs to drive more effective ad performance by enabling more precise targeting.

That had appeared to be the line last year.

This year, he offered a different view.

“I'm not sure that agencies are directly comparing us with Facebook and Google like you suggest,” Stephenson told Mi3.

That’s because people buying ‘total TV’, i.e. linear, BVOD and live streaming, were playing through the marketing funnel, a combination the tech platforms arguably still fail to deliver. "It's why total TV is so important because it provides a full funnel solution for marketers. To do that effectively you need to have the technology and Nine is the only place where we can provide a total television buying experience for our clients."

Meanwhile, the growth of broadcast video on demand has made BVOD a “serious subset of the broader digital video market with a product that can compete with YouTube – and that I think is beyond Facebook video,” said Stephenson.

“Having the ability to target effectively using your own first party data as a client is going to drive greater expenditure into that platform,” he added. “That will be good for Nine and will deliver better results [for advertisers] as well.”

Asked how much of Nine’s ad business is now ‘people-based’, Stephenson said circa “50 per cent of digital inventory has some form of data attached to it… and it is growing rapidly”.

Nine will integrate Salesforce’s CDP in early 2022. The network, did not provide a precise figure, but claims its BVOD platform 9Now notches between 3-4 million active logged-in users on a monthly basis.

Advertisers need to match those users with their own data to make people-based marketing work. The more logged-in users the network has at any one time, the better the chance of finding a match and driving results.

Seven has been vocal about the 3 million additional logged-in users it gained from the Olympics, 90 per cent of which it says remain active. Headline numbers from both media groups are rising – Nine retains its top slot with 14m to Seven's 9.2m but active logged-in users will increasingly be the focus.

Nine’s presentation also flagged a push into attention metrics, with the network committing to work out how it will develop a tradeable attention currency with Professor Karen Nelson-Field's Amplified Intelligence.

Stevenson declined to commit to a launch date, but said the network would take the time “to do this properly” for a market rollout by April next year. “It’s early days,” he said. “You’ll hear a lot more about it next year" although Powered boss Liana Dubois yesterday reminded Nine's upfront users that longer "active attention" to ads had a direct correlation and impact to sales.

The network is much further advanced in its push to apply digital approaches to bundled buys, moving towards a CPM-based trading model for ‘total TV’ campaigns bought using its 9Galaxy buying platform.

Agencies will be given direct access to live availability for Nine’s linear, live streaming and on-demand TV inventory, with self-service access and API feeds, bringing Nine closer in line with the self-serve approach taken by big tech.

The move also creates consistency with streaming and on-demand pricing on the 9Now platform, which has always been traded against an agreed CPM.

Stephenson said that approach extends Nine’s ability to provide guaranteed audiences with no shortfalls and no make-goods across TV inventory, BVOD and live streaming.

He hopes the CPM model will drive buying of off-peak TV via its Galaxy platform from circa 40 per cent to 70 per cent within 12 months, but said trading prime inventory on a CPM basis is not yet part of the plan. Agencies, he suggested, prefer to buy premium TV inventory “on a spot by spot basis”, for now.

"I think that's where it goes ultimately, just not yet,” said Stephenson. “The ad market is not yet ready for a change like that. But this is a step in the right direction, and it will get there eventually."

From total TV to total audio

Nine Radio was also touting digital transformation at this year's event, with a first-party data push as it lifts TVs playbook and moves towards ‘total audio’.

Tom Malone, Managing Director – Radio, confirmed Nine has implemented single sign-on across its digital radio platforms. He said 15 per cent of Nine’s audience is streaming radio or consuming podcasts on a monthly basis, in August racking up 12 million streams and 600 million streaming minutes.

He said Nine will soon provide automated buying of live audio streaming and podcasts alongside TV through 9Galaxy.

Meanwhile, regional TV is also being added to the automated buying platform.