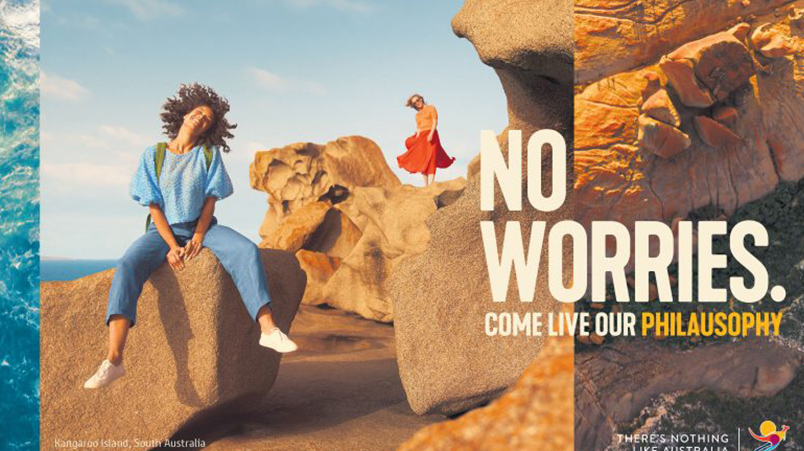 In the wake of the bushfires, Tourism Australia has benched the next phase of its $38m PhilAusophy marketing push, received another $76m in federal government funding and is set to review its annual $80m global media contract this year. No worries?

Tourism Australia will conduct a statutory review of its $80 million a year global media contract this year while it seeks to appoint a global manager of media partnerships. Part of that remit will be to manage the global tender across 15 international markets.

It comes as TA’s international campaign was pulled in the UK because of the Australian bushfires. The tourism body will likely now review its strategy for luring international visitors.

“Tourism Australia is currently recruiting for the Global Manager, Media Partnerships role to join the marketing team, after the role was vacated by a team member who recently relocated overseas. The role has responsibility for managing Tourism Australia’s global media agency relationship which includes overseeing the planning, coordination and management of the Global Media Tender process as part of Tourism Australia statutory requirements.”

TA’s hunt for a media partnerships manager outlines the need for experience in managing an agency review process. “Reporting to the general manager, brand, campaigns & media, and managing a small team, the main responsibilities of this role are to manage the global media tender process; plan and coordinate and measure global media deals; manage global agency and supplier contracts and relationships; drive innovation and efficiency in owned, earned, shared and paid media to deliver on strategy and support international markets to develop and execute annual media plans,” TA says in its posting for the position.

Does Australia need to rethink how it markets itself?

In a recent Marketing Week opinion piece, Mark Ritson outlined the impact the bushfires will continue to place on Australia’s international image.

Using search as a simple example, Ritson showed a comparison between images Google presented of Australia in 2018 and how they appear now.

2018 shows all the sea, sun and surf that traditionally underpin Australia's core international marketing assets. A Google image search in 2020 depicts a very different Australia, one of smoke, fire and fear.

As a country whose main exports are good times, relaxed environments and iconic flora and fauna, the  global coverage of our bushfire disaster presents strategic challenges for Australia’s tourism growth.

Ritson argues that even though Australia’s environment may largely recover, how we appear in the global mind's eye may not, particularly if the image of a burning nation becomes an annual recurrence.

As the fires rage on, the short-lived conflict and media storm that surrounded the launch of Tourism Australia’s ‘PhilAusophy’ campaign has fizzled out.

Privately, some close to the PhilAusophy campaign say the strategy was much broader and bigger than the launch phase, which elicited some negative responses online around a perceived lack of diversity.

Either way, the next stage of the $38 million marketing push has been benched for now and some have questioned whether the three-year plan can continue in the same direction or whether it will be scrapped entirely.

The challenge here isn’t to prove that TA can continue to sell Australia to the rest of the world in the same fashion, especially if you are to believe Ritson’s thoughts, but rather about finding something else that makes Australia unique.

But it will require something powerful.

Initial estimates of the bushfires' impact have the total loss to tourism at least $4.5bn by the year end, with international tourist bookings down somewhere between 10-20 per cent.

One revenue director for a major Sydney hotel told Mi3 revenue for their establishment was down nearly $100,000 for the month in January.

This is especially concerning given the current investment already being made in luxury hotels throughout Sydney, thy added, with the next three years said to be the biggest in terms of room growth in Sydney's history.

In response to the concerns, the Morrison Government has announced a $76 million tourism recovery package to stem the losses incurred by the bushfires to date. According to reports, the breakdown includes $20m for domestic marketing and a further $25m for a global marketing campaign.