Targeting under 40s? It’s time to wake up to news 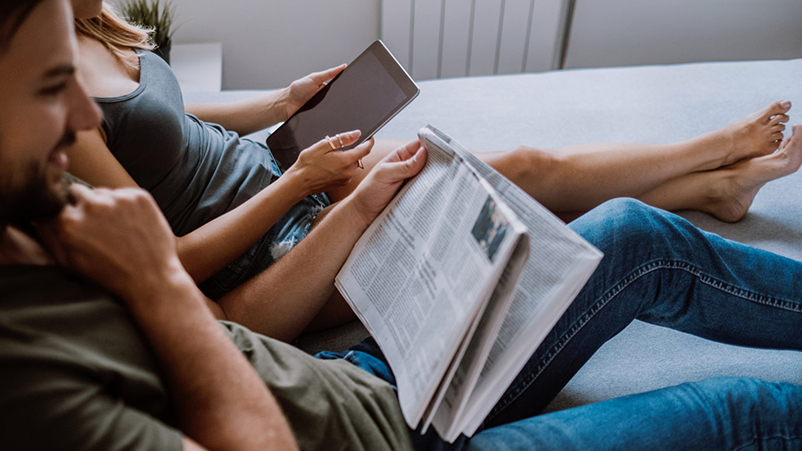 While research finds three in five under 40s get their news from a physical printed newspaper, they’re consuming news digitally at a much greater rate.

It’s hard to overstate how much younger audiences engage with news. Every week, more Australians under the age of 40 engage with news than any other channel – including social media. Here’s why agencies should plan campaigns to include news as a channel alongside social, out-of-home and radio.

Speaking on the Mi3 podcast earlier this year, she said: “They don't necessarily come in through the front door at the home pages of our publications, but they know what's going on. They read it. There's a bit of a misconception around that.”

While research finds three in five under 40s get their news from a physical printed newspaper, they’re consuming news digitally at a much greater rate.

Still, there’s the belief that young people aren’t reading news at all. It's exactly this misconception ThinkNewsBrands is looking to set straight with the release of The Youth Chapter, a report that shows nine in 10 under 40s engage with news every month.

Drawing on Roy Morgan data, the report shows each week, news engages more under 40s than any other channel, including social media, with dwell time on the rise.

Vanessa Lyons, General Manager of ThinkNewsBrands is concerned media planners, many of whom are themselves part of this key demographic, think only of printed newspapers when they think news. She says: “It’s crazy we’re still pointing this out, but news is no longer just a physical print product. The industry currency, Total News, as measured by the Roy Morgan, encapsulates digital and printed news produced by journalists for Australian readers. And under 40s are a major part of this audience.”

As The Youth Chapter highlights, 94 per cent of under 40s in Australia read the news each month. Of that, 96 per cent of 25-to-39-year-olds are reading news and 91 per cent of 14-to-24-year-olds engage with news on a monthly basis.

Regan Hancock is Planning Director at media agency Hatched. He says: “We knew that news had seen a resurgence of sorts throughout the pandemic. It will be interesting to see how many of these behaviours remain in a less pandemic-obsessed world.”

It’s a point The Australian’s Gunn discussed with The West’s Anthony De Ceglie and Nine’s Tory Maguire on the Mi3 podcast. The pandemic is far from over, the trio pointed out, and even when it is, there will always be a news story that captures the attention of audiences: from the forthcoming federal election to the recent rescue of kidnapped toddler Cleo Smith.

One demographic Hancock sees as being particularly invested in news is Gen Z. Born between 1995 to 2010, the cohort is considered to be true digital natives. “In many ways, people have never been more addicted to the headlines,” Hancock says. “Gen Z, in particular, is known for being more socially aware. They are far more likely to be researching, or at least reacting to global and local news, especially in the context of the last two years, with many of the headlines having direct impacts on them.”

Still, not all media buyers are convinced. Giorgia Butler, Head of Strategy & Innovation at Nunn Media, says: “News is not often the solution we put forward for this cohort.”

Part of the reason is her view of news as a channel. “News, in and of itself, is not considered a ‘channel’ from a media buyer’s points of view – certainly not in the same way social, radio and OOH might be,” she says. “It’s just not the way we look at planning around audience reach or engagement.”

ThinkNewsBrands’ Lyons is working to shift this perception. She says: “A major driver behind the move to Roy Morgan for the measurement of news readership was to change this view. News can be a channel, and research shows it is a highly effective one with the ability to encode brand memories and drive propensity to purchase.”

Moving forward, Lyons says media buyers should take this into consideration, specifically for youth audiences. “The media landscape is constantly changing but the one thing we can always rely on is news,” she says. “People of every age need trusted, professionally produced content now more than ever before.”

Hatched’s Hancock notes: “It’s good to have validation that this demographic is engaging with news to this extent and it will be a useful input to our channel planning for the first half of 2022.”